Welcome to the Premiere of “Name That Wine”

Let’s get one thing straight: blind-tasting wine is hard. Even seasoned sommeliers and wine journalists would agree. But doing it on video and then blasting it out to the world? Now we’re in scary territory.  Yet that’s exactly what my friend and fellow wine blogger Rob Frisch are doing, as we bravely unleash Episode 1 of our new YouTube series called “Name That Wine!”

The premise is simple: we get other people to buy us wine and we have NO idea what it is. It is uncorked and brown-bagged. We pour and we have at it, sniffing, swirling and sipping our way to either wine wizardry or …. wine idiocy!

I mean – how embarrassing would it be to call a wine a California Chardonnay, and have it actually be a Pinot Grigio from Friuli, Italy? Or call a Bordeaux red a Chilean Carmenere? You know it’s gonna happen and we’re just gonna have to take it – that’s how far we’re willing to go to bring you six minutes of suspenseful and silly entertainment! So – Episode 1, sure it’s a little rough (and of course, I had my hair done the day after we shot the first two episodes….sigh), but hey, you gotta start somewhere, right? Let us know what you think, and stay tuned for the next episode of … “Name That Wine!” 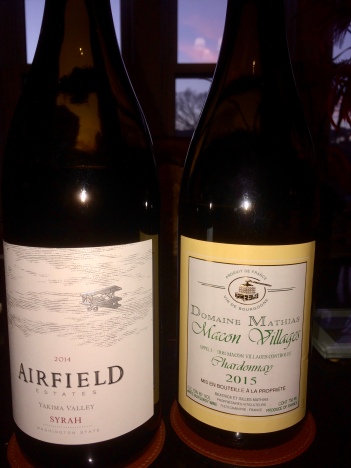 In Episode 1, our esteemed Production Assistant, Tom Heil, purchased two bottles for us at In Fine Spirits, Andersonville’s finest wine shop. They were both delicious and here is what they wound up being, in case you’d like to taste them yourself, with eyes wide open.