Wines of The Hess Collection Stand Out

Greetings, Wineaux: I recently had the pleasure of dining and wining with Dave Guffy, executive VP of winemaking for The Hess Collection in Napa Valley, and John Grant, president and CEO of Hess Collection. We met at a fabulous Chicago restaurant, Momotaro, where we talked, tasted the current releases and I learned about what sets Hess Collection wines apart. 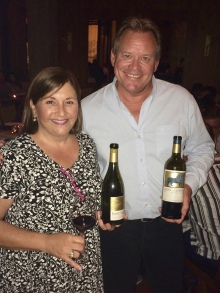 Anyone who buys wine at the store is probably familiar with Hess Select Chardonnay, Cabernet and other varietals that retail for around $12-$15 per bottle – great, everyday wine. But what I didn’t know much about was The Hess Collection wines. These are a little more special and Dave Guffy explained why.

The Land: Hess Collection is located in the Mount Veeder AVA which is east-northeast of downtown Napa. It’s got a lot of hillside property, which grapes love because of the great drainage from rains (those grapevine roots do not like to be all soggy and squished up in a bunch of wet mud!)

And as you can see from this tiny map, it’s got good proximity to the San Pablo Bay which blows lovely ocean breezes to keep the grapes cool at night – which makes the grapes – and the winemaker – happy.  According to Guffy, “Site trumps everything. With grapes, if you don’t have a place, you’ve got nothing.”

The Winemaking: Dave Guffy has some creative tricks up his sleeve when it comes to how he makes the wines.

Okay, what the what, because who in their right mind takes primo Napa Valley vineyard land and grows Malbec – instead of Cab or Merlot or even Chard? Dave Guffy does, that’s who. Hess is the largest grower of Malbec in all of Napa Valley, with 33 acres of the stuff. And that is Dave Guffy’s secret ingredient in a lot of the Hess Collection red wines. “Malbec can tame a big, brawny Cabernet,” said Dave. “Plus, Malbec brings some interesting, complementary flavors to the wine, like blueberry, cassis and a hint of mocha.”

I’m happy to know more about this legendary Napa Valley Mount Veeder winery and I hope you have a chance to try some of their gorgeous wines. Let me know if you like them as much as I do! And thanks to The Hess Collection for providing the samples (and dinner).