Getting to Know Wines from Weird Places

I just attended VinExpo New York, where wineries from all over the world come to pour their wines for potential importers and buyers (and writers like me). And while “weird places” might not be the most accurate descriptor, I decided to get to know wines from countries that might not have much presence in the U.S. – yet! I focused on wines from Czech Republic, Georgia and Serbia and it was FUN!

The first winery I have to gush about is Erdevik, from Serbia. The burly looking man at the stand sporting an impressive beard with a friendly smile was Dorde Stojsic (Georgie). As he gave me the background on Erdevik, things got really interesting:

In a nutshell – this place is located in pretty much the most ideal location for growing grapes. Now to the wines – let’s drink!

Ex Cathedra Sauvignon Blanc 2016 – Wow-wee, this wine is the bomb! It’s busting loose with bright juicy citrus and has a bit of heft to it on the palate. This is no wishy-washy acid bomb – it’s a well-balanced beauty of a white wine that makes me wish I had some grilled shrimp in my pocket. 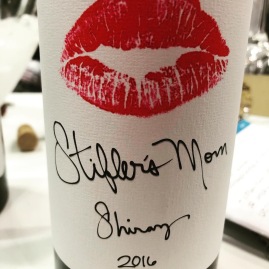 Stiffler’s Mom 2016 (Shiraz) – Now, the name of this wine – and its label – is hilarious. Georgie said “Everyone in Serbia knows that movie – ‘American Pie’ – and because this wine is aged – we named it Stiffler’s Mom.” It is 100 percent Shiraz and it shows – it brings the spice, the pepper, the dried herbs, all layered in with lively red and black fruits.

Grand Trianon 2016 (75 percent Cabernet, 25 percent Merlot) – I swear, this wine, if tasted blind against a Napa Valley Cabernet? You would be hard-pressed to tell the difference. It did not display any true Old World characteristics like earthiness first, fruit second, for instance. It was generous and juicy and really well balanced. Where’s the steak? Who’s got some grilled sausages?

So, Serbia – well-done! I mean, you’ve got the place, climate, the heritage and wicked-good winemaking know-how. Now if we can only find this guy a U.S. importer! Okay, next! 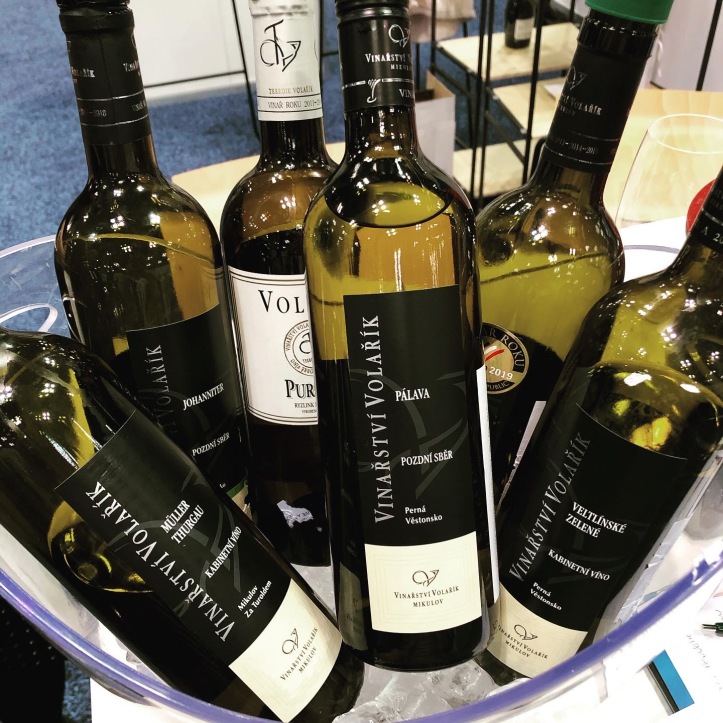 Let’s visit Vinarstvi Volarik from the Czech Republic. Oh, man, I can’t even tell you how this is pronounced, but it doesn’t really matter. What matters is that the two sisters whose family owns this winery were an utter delight and their wines bring it…. all day long.

Radana Stahalova and Eliska Reinhold (she married a German) explained that their family’s winery is in Moravia , the main region of the Czech Republic where wine made – about 300 kilometers east of Prague. 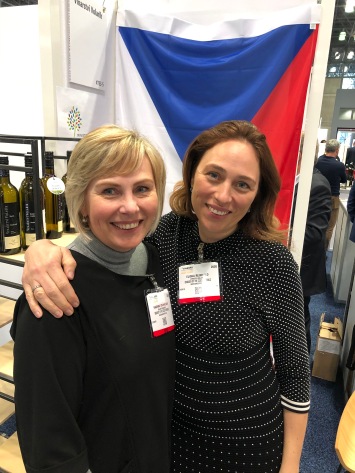 They make some baller wines, including the Austrian varietals Müller Thurgau and Grüner Veltliner (both really delicious), but also some grapes I had never heard of (oh, wait’ll we get to Georgia … talk about grapes you’ve never heard of). They introduced me to a grape called Johanniter and another called Palava. Let’s taste!

Johanniter 2018 – This wine is a little like a Riesling – bursting with tropical fruits like lychee and pineapple flavors, but not as oily on the palate (I know – sounds gross, but it is a trait of Riesling). It would be amazing with any type of spicy Thai food or sushi.

Palava 2018 – Here we have another new-to-me grape. Palava, I learned, is a cross between Müller Thurgau and Traminer. It only grows in the Czech Republic. It has a nose that shouts “sweet, tropical wine!” But with only 3.2 grams-per-litre of sugar (which is really low), it’s dry on the palate. A really fun wine! If you like dry Riesling, or Pinot Gris / Grigio, or dry Muscat, you would love this wine.

Now, for a trip to the land of crazy winemaking and unheard-of grapes: Georgia! Georgia had a huge stand at VinExpo – as many as 10 different producers were showing their wines. I bellied up to the handsome gents at the Alazani table and I think I hit the Georgian wine gold mine. (Alazani is a major river in eastern Georgia and also the name of the wine region near the river.)

First, let’s talk about the fact that Georgia is the birthplace of wine. Historical records show that wine was being made in Georgia 8,000 years ago. Crazy, yes, I know – it doesn’t even really compute.

But the other cool thing is how they make wine in a vessel called a qvevri – these big urn-shaped vessels that are underground. There are, essentially, three steps for making the wine this way:

Shazam! Pretty basic, yes? Now, Daniil and Giorgi explained to me that most wineries in Georgia today make wine the “European way” (which is also the “American way”),  where you crush the grapes and ferment the juice either in stainless steel tanks or oak barrels, as well as the traditional Georgian way in qvevri.  But interestingly, they said that the qvevri method really only came back into style in the last five to seven years due to demand from Western countries.

The yields are much lower when you use qvevri and it is much more expensive to make. Alazani hires 40 people to make 50,000 liters of qvevri wine, while just 30 people are required to make 1.5 million liters of European-style wine. So, yeah, qvevri wines carry a higher price tag (about $8-$10 per bottle wholesale, compared to $2.50-$5 per bottle for European-style).

As a wine geek, I found all this fascinating and I MUST book a trip to Georgia to see this all for myself. But enough geeky stuff – let’s drink! Danill and Giorgi took me through a tasting of nine or 10 wines, both qvevri and European style. I’m not going to go into huge detail on them all, but I am going to just list them out, because it’s good to know the names of these grapes. You never know – you might be in a wine shop and see some Georgian wine, and you’ll be all, like, “Hey, man, I know this Chinebuli – it’s from Georgia, right?”

Tsitska 2019 – This white wine is like a Chardonnay body with a Pinot Grigio head. It’s got weight, it’s got texture, it’s got peachy / lemony notes, great acidity and I LOVE IT!

Chinebuli 2019 – This white wine is a tidal wave of floral aromatics, tropical fruits and jasmine.

Tsarapi 2019 – A white wine with tannins? Yep, I found one. This crazy wine is like a smoked key lime pie dusted with a little baking spice. I know! It’s wacky – but delicious!

Rikatsiteli Amber 2019 – This is a hallmark grape of Georgia, and made in stainless steel (no qvevri). It’s an Orange wine, meaning no filtering (aka a “natural” wine). I called it a “gateway wine” in the natural category, because it’s utterly juicy and delicious without the overwhelming dirty-feet funk that a lot of natural wines have.

Okay, on to red wines! Whoosh … this is fun. Oh, hey, I spy my friend Pinny Tam over there, also tasting Georgian wine… But I digress. Press on, as they say…

Saperavi – This is Georgia’s main red grape – in fact, 80-90 percent of all Georgian red wine is Saperavi. This said, I tasted through five different Saperavi wines from Alenzani and they were all a little different. They were all made in the European style, some in all stainless steel (no oak at all), some bottle-aged for a year, some from grapes that had been dry-farmed, and one made from prized grapes sourced from five different vineyards across Georgia’s most iconic regions. (that one was the Tavkveri … I likened it to a Pinot Noir that had a baby with Shiraz).

One trait they all shared: deliciousness. If you like Cabernet Sauvignon, or Merlot, I think you would love Saperavi. If you want to read more of my adventure sin Georgian wine, check out this post from a couple of years ago.

I’m excited to see what Eastern European wine delights await me at my local wine shops. You do the same and let me know if you find any – and what you think. As they say in Serbia, Živeli! And, Prost in Czech Rebpulic and Gaumarjos in Georgian!