What I Drank on My Summer Vacation

Well since it is Labor Day weekend – which seems somehow to have become a marker of the end of summer – I thought I’d share a look back at what I drank on my summer vacation. While I only took one actual vacation, there were some awesome sipp-ortunities all summer long. Ready? Let’s take a spin through my summer drinking!

I spent a week in Oregon in late July with a friend who is a fellow wine and food freak, and we managed to hit a few OG wineries (one that have been around since the beginning, paved the way and set the bar high for followers) as well as a couple of  hidden gems (teeny tiny wineries that you should seek out to visit or purchase wines). 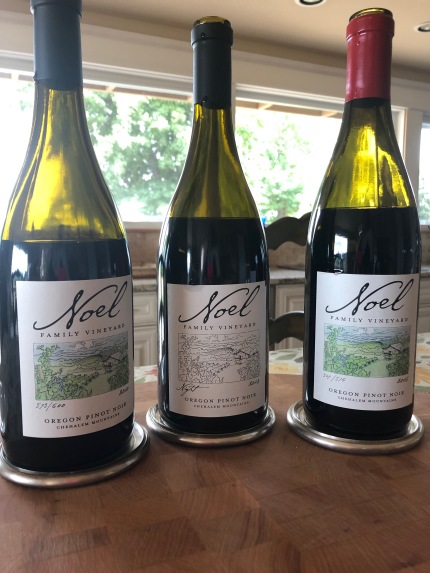 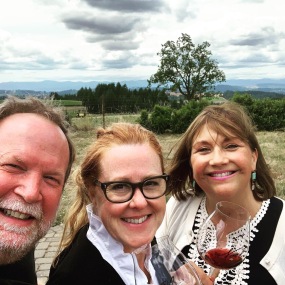 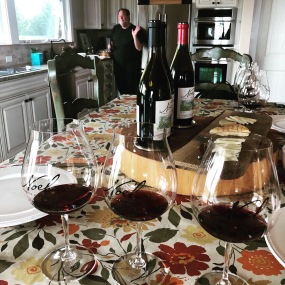 First, we were invited for lunch by Mike Noel, who started Noel Family Vineyards with two acres of Pinot Noir vineyards in the Chehalem Mountains in 2007. He made his first vintage in 2010 and has continued to make small-batch pinot noirs every year. He greeted us at his home and proceeded to open his 2010, 2012 and 2016 vintages, while he put together a spread of cheeses, charcuterie, really excellent bread and other delicacies. It was so much fun to sit, sip and talk. Wine is his side-hustle (for now) and you can tell he loves sharing it with people (I had to almost insist on paying him for three bottles to bring home!) Some of the most discerning critics have given high marks to his wines.

Then we popped in at Sokol Blosser to say hi to some friends and were treated to some remarkable hospitality. Sokol Blosser was started in 1971 by Susan and Bill Sokol Blosser and is now led by the second generation — siblings Alison Sokol Blosser and Alex Sokol Blosser (who is the winemaker). They have a beautiful tasting room that was hopping on a Tuesday afternoon in late July. Their Pinot Noirs and Pinot Gris wines are some of my favorites in all of Willamette – finely-made with fruit from some exceptional estate vineyards. 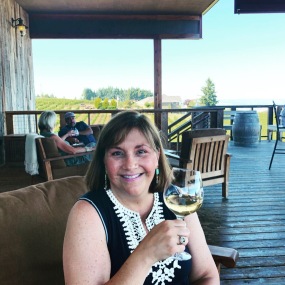 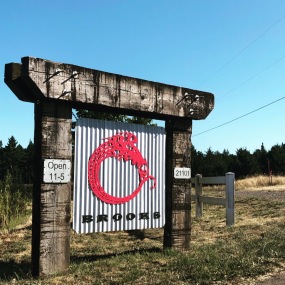 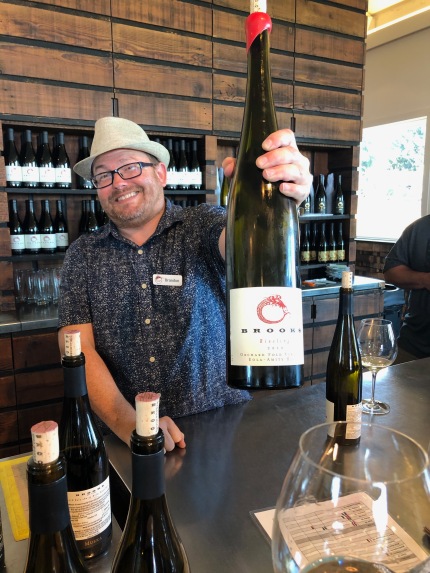 On our way to Amity for a pre-IPNC (International Pinot Noir Conference) dinner at the Blue Goat, we got thirsty so we stopped at Brooks, which was started in 1998 by Jimi Brooks, a beloved figure in the Willamette wine community. Sadly, he died in 2004, and today, his son Pascal owns the winery, and works alongside Janie Brooks, Jimi’s sister. I’ve had their wines before and was excited to see the place. The tasing room was hopping at about 4:15 and they poured us big glasses of their delicious Riesling from magnum (everything is more delicious out of magnums!). We chilled out on their porch, which has amazing views of Mounts Hood, Adams and Rainier in the distance. They also have a full-service restaurant, as well as their own private label beer on tap, so there is something for everyone at Brooks. 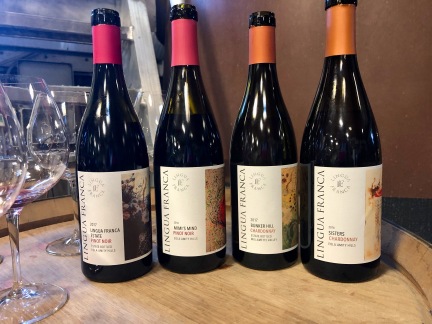 We also crammed in a visit to Lingua Franca, the new winery started by Master Sommelier Larry Stone in 2012. I was quite familiar with Stone, as he headed up the wine program at Charlie Trotter’s in Chicago in the 1990s. Having tasted his wines at “Pinot in the City” hosted by Willamette Valley Wineries, I was so happy to see the place. They don’t even have a real tasting room yet, but we stuck our heads in a door in the winery and they said, “Are you Liz? Come on back – we’ve got some bottles all set up for you!” I mean – so nice! – and they were hosting a big industry tasting that evening as part of IPNC.

Lingua Franca makes Chardonnay and Pinot Noir, many from single vineyards. Avli is their entry-level line, retailing for $25 -$30 a bottle. The single-vineyard Lingua Franca wines are pricey, but worth it, when you think about every single element that goes into each bottle. I can’t wait to taste what keeps coming out of this winery. 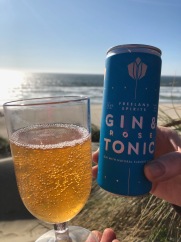 After our Willamette Valley adventures, we embarked on a road trip to the Oregon Coast, having scored a cute cabin for one night in the beachside town of Florence.  After stashing our wine in the fridge to chill and stowing the pound of fresh-caught halibut we’d purchased for dinner, we drove to the nearest beach and popped open some cans of Freeland Spirits new canned Gin and Rose tonic, added a squeeze of lime and toasted summer! 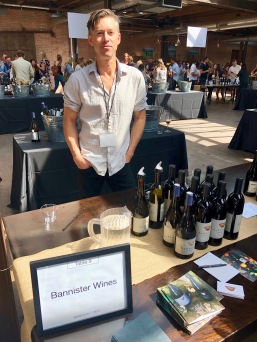 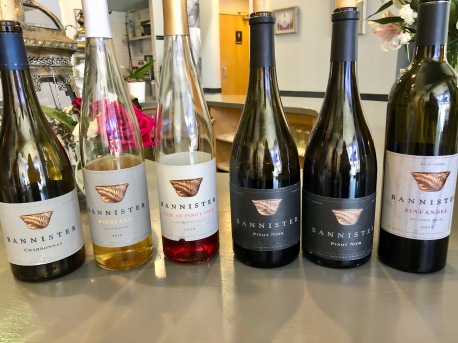 So then I came back to Chicago, and you know, drank a bunch of rosé with friends, and was up to the usual high-jinks. Then I recently spent a few days with Brook Bannister of Bannister Wines in Alexander Valley, in Sonoma County. He was in Chicago for a big tasting event hosted by Winestyr, the online wine club that specializes in small producers.

After living in New York (a rooftop garden business) and Oakland, CA (hand-crafted furniture business), Brook returned to Sonoma and the family winery business in 2012, which his mom, Marty, started in 1989. While his mom deals with some health issues, Brook works his ass off to craft cool-climate, vineyard-designate wines of depth and elegance.

Brook’s single-vineyard Pinot Noirs have garnered the respect of sommeliers and wine consumers up and down California and in Chicago and New York. You can order his wines online and you can also find them in Chicago at Madison & Vine, Perman Wines and two other shops that I am trying to remember! Try the Pinot Noirs, and if you find his orange Riesling, do NOT sleep on that. And his Zinfandel – pure blue fruit, zippy, fresh acidity and magnificent texture. Bannister Zinfandel changed my mind about Zin, which I previous regarded as often jammy, over-extracted, and overly high-alcohol. Brook takes pains to make sure his Zin is none of those things. It’s delicious. And his Chardonnay – perfectly balanced, more Burgundian in style (less oak, less malo, more fruit, excellent acidity).

So – there you have it: what I drank on summer vacation. Tell me what some of your favorite summer bottles were! And enjoy the last weeks of summer sipping!